Timestamps:
Roulette: 0:00
Baccarat: 2:30
TOP TIP: when you win the first round, quit out, and check the progress , The game will accumulate any total WINNINGS, As long as you quit with a positive number, it’ll add to the total, and the total will never go down

Baccarat: I’ve won it a couple of times. It’s all a matter of luck. Just keep reloading and reloading and you will eventually win, Play as a player not as a banker the ods are 1/2

The slightly less known French card casino game, baccarat is a quick game of very high stakes. The version here is the common (outside of France) version known as “punto banco”, almost entirely based on chance. The simplest version of the rules are to pick someone to bet on, either the player or banker, or for a tie. Both the player and banker get two cards, and the values for those cards are added together (face cards are worth zero). The ones digit of the cards of each hand are compared and if either is an 8 or a 9, that hand wins, or it’s a tie if both are. In the case of being less, the player draws another card, then the banker may draw another depending on the results.

There’s a lot more involved in baccarat, but given punto banco is so simplistic and chance-based, here’s my strategy for you: get a bunch of chips together, save the game, go highest bid on whichever you want, reload if you lose, cash out if you win. The game goes really quick to the point where there’s no real need to fuss over any kind of tactics. The cheat items are the Player’s Piece and the Banker’s Piece. Using them before you play puts the odds of winning drastically in favor of that side.

Note: Casino games require you to “cash out” to get your winnings. It’s no use simply winning, losing, and breaking even during one session and expecting it to count towards completion. You’ll have to back out of the minigame and get the tally to add to your completion metric of wins. That said, any losses you accrue from cashing out don’t apply to the completion metric.

Roulette: LUCK BASED
mix up your bets and choose a few different high payout options rather than just doing 0/00 or red/black, and only play one round and then quit.
Alternative strategy: going all in on either red or black or 0/00 generally, it’s a way higher chance to win if you luck enough.

bet the most wager possible always on either 0 or 00. If you choose to take the 00 stick to it everytime, don’t change your mind inbetween. Sometime you’ll get lucky.

Press Square and “Rules” to see exactly where you can place chips. Once time is up, the ball will fall, and if you covered that space, you get money back. How the money pays out depends on where you put it. For example, going on Red or Black only pays 2 to 1, while going on a single number pays out 36 to 1, and several combinations in between, which you can see if you check “Payouts” when you press Square.

There’s also a neat thing called “Survival Rules”, which might happen if you play a lot. You need 10,000 chips to play. In Survival, both you and the dealer place seven tokens on the board randomly, and if the wheel stops the number your token is on, you lose that token. This actually has an element of skill, because you can aim where the ball will land on your throws.

If you continue to play, there’s also a “Dealer Mode”, where you play as the dealer and throw the ball with the same kind of style as Survival. If players win, they’ll tend to bet more. Check it out if you’re interested.

Note: Casino games require you to “cash out” to get your winnings. It’s no use simply winning, losing, and breaking even during one session and expecting it to count towards completion. You’ll have to back out of the minigame and get the tally to add to your completion metric of wins. That said, any losses you accrue from cashing out don’t apply to the completion metric. 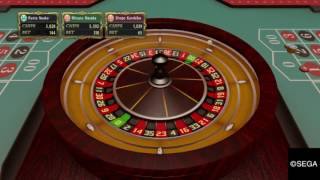