Learn How to Play Craps. My partner and I started a small Casino Nights business in Salt Lake City in April of 2001 located at 4771 So State Street. Because of the bizarre nature of our business, we received front page headlines in the Salt Lake Tribune on April, 14th and write ups in numerous local publications as well as a few television interviews on local news stations. We attracted numerous offers for funding from people looking to do something different. We we’re approached by the then owner of the Great Saltair about coming to that location to do our business. We thought about it and decided to give it a try and expand immediately. So we trucked ourselves off to the copper domed “Moorish Temple” looking building on the edge of the Great Salt Lake. We trained a large staff of dealers (33 to be exact) for our table games and opened in August of 2001.

Although the Saltair is on I-80 and has it’s own exit, it is situated about 30 minutes from the greater Salt Lake area. The gasses produced by rotting vegetation on the shores of the lake makes it smell like somebody shit on a bad pizza. Brine fly infestation, wicked weather coming directly off the lake, gale force winds blowing out the windows on the upper deck, stolen roulette wheel and other gaming hardware…..seems like we were doomed from the beginning.

The building is MONSTEROUS. We had access to more space than we could ever use. 50,000 sq feet of space down stairs and 10,000 upstairs on the upper deck level with views of the lake. The building has a contract with a concert promoter and we had to close the Casino Fun Club every time there was a concert or rave party. We closed for good shortly after 9-11 happened.

Shortly after closing, the owner of the Great Saltair changed the name of the corporation we formed not telling anyone involved except his seedy Lawyer. His new corporation was used to shuttle $16 million in fraud money that was bilked from foreign investors in the UK and Southeast Asia. A bullshit Stem Cell research company was tied to this corporation.

6-7 months after the Casino Fun Club closed its doors, I received a Fed Ex package at my home in rural Utah delivered by the Sheriff . It was from the Securities and Exchange Commission, better known as the SEC. It came as a complete shock to me that my name was attached as a senior partner to the corporation used to shuttle the afore mentioned fraud money. The box weighs over 12 lbs and reads like a gangster novel. It took months of diligent phone calls and letters sent to various entities to clear my name and I believe my phone was bugged for months both before and after this mess.

Moral of the story…..don’t be afraid to march forward with a good idea. Just be careful who you let in your doors and don’t be swayed by someone with a pile of cash as not all millionares are deserving of the status that comes with the wealth. I am far wealthier on many levels, even with ZERO dollars than the millionaire asshole who has stolen all of his assets. Upon further research I discovered that our investor was charged with penny stock fraud and manipulation of the markets with the mob. He was also tied to another little thing called the Savings and Loan Scandal in Florida. He did 10 years in federal prison for that one. Claimed he was innocent. I’m not so sure.

Thanks for watching. I welcome your comments. 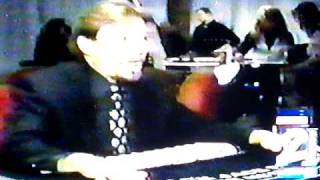