A progression that can make you some extra money while playing other strategies at the one dollar level not really a huge risk but not to say it can’t get up there in investment. The five dollar level you can make some big money but you need to have a huge bank roll. Basically you decide when you want to double I was doing it at six every six shots if you do it at four you will make more money because at six you do not make money on the three or the 11 you actually lose a little but it does reset so therefore in the long run it seems to win like that it’s kind of up to you the correct way to do it. Would be five shots on the three and 11 and 10 shots on the 12 and two. But it is kind of hard to keep up with that way especially if you’re worrying about other strategies you’re playing so it’s entirely up to you and how you feel the table is going 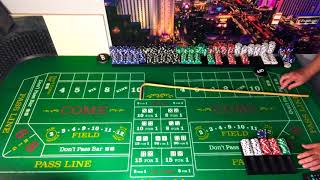 3 thoughts on “A little horn side bet craps strategy”