If you’re interested in licensing this or any other Big Think clip for commercial or private use, contact our licensing partner Executive Interviews: https://www.executiveinterviews.biz/rightsholders/bigthink/

Champion poker player and all-around fantastic human being Liv Boeree isn’t suggesting that children become professional gamblers who play for high stakes, like she often does. But she is suggesting that if more children learned poker, they might be more ready for the real world. For instance, what is a poker hand other than a progressive set of decisions with consequences, sort of like life itself? Liv posits that children would learn that actions have consequences and there are benefits to updating your beliefs, which are are very important developmental skills (and ones that even some adults have yet to master). She also argues that it quite possibly makes you better at mental math.

Do I think we should teach poker in elementary schools? Yes, I think there are elements of the game that you should teach in terms of like—because what poker really does is teach you how to deal with probabilities and uncertainties, and that’s so integral to life.

Everything we try to do—“should we take this route or that route”, “should I go here on vacation or there”—it’s all about dealing with uncertainties and probabilities of things happening, and poker is a very fun and easy way to teach someone how to do that.

And there is so many like core fundamentals of the game that I wish I had known at age ten, these ideas, these sort of ways of thinking about expected value and probabilistic thinking in general would have sped up a lot of things in my life had I been more aware of it.

So, if there’s a way to teach children through a game, and children love to learn through games, poker could be one of those methods.

I think being mathematically minded is—there’s probably some aptitude involved in it, but I still think the vast majority of it is down to the determination and practice.

You can take someone, I mean if you can just understand the concept of numbers in the first place, which I think the vast majority of humans can, then you can train someone to be more mathematically capable.

It’s like learning a language; it’s almost like you have that initial passion and desire to get better, then it’s those little incremental jumps.

And it makes me so sad when I meet people who are like “I’m no good at math, no good at math” and if you actually keep asking them why and go back in their history it almost always comes down to some bad experience they had when they were probably seven years old and the teacher asked them “what’s five times five?” and they screwed up and their friends laughed at them, and then these barriers get built and they’re like “oh it’s not my thing”.

And I think it’s just a huge tragedy because most humans can learn to be at least competent at basic mathematics, especially the mathematics involved in poker. It’s really not that complicated.

There’s a lot of approximations you can do and I found that I used to actually not be very good at mental arithmetic. I was fine if I had a pen and paper and algebra, that was, I liked that, but in the moment of, mental arithmetic I could never do.

But I started playing poker and started practicing these things and now it’s a skill I’m proud of. So it’s just a willingness to keep plugging away at it. 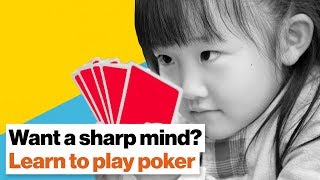 10 thoughts on “Why elementary schools should teach poker | Liv Boeree”