Watch more How to Gamble at Casinos videos: http://www.howcast.com/videos/511511-Basic-Poker-Strategy-Gambling-Tips

Want to learn how to play poker? In this video, a gambling expert explains the basic strategy of playing Texas Hold ’em. It’s up to you to work on your poker face.

Hey, guys. I just want to go into a quick Texas Hold ’em poker strategy. This is very rough and basic, just enough to get you by if it’s your first time playing. Right now, we’ve hit the button set and blinds are already in place. And we’ll deal everything face-up just so everybody could see what’s going on here.

So, a hand like this. Generally, the hands wouldn’t be shown here. But this guy with no knowledge of anything that’s going on. Right now, with four people at the table, he may feel that he’s got a pretty good hand right now. He may opt to raise or he may want to just call and see if he can improve this by getting another 5. But I’ll just place a bet right here and say he calls.

A hand like this generally, any hand with, that’s like 2-6 or 2-7 or 3-8, or anything with just a bunch of low numbers. They’re generally considered really bad hands to play. So we’ll say this guy is going to fold. If you were to treat your poker hand like a blackjack hand like Aces are 1 or 11 or face cards are 10. Basically, if something adds up to 19, then it’s a good hand to play. Anything less than that, you probably want to stay away from.

This is all going to come here in the pot. One card gets burned. And now, the guy with the Aces. He’s what’s called an overpair. The board has got a 4, Jack and a 3. The Jack is the highest card here. He’s got an overpair to the board, so even if somebody like this guy, who’s got a Jack. He’s going to think he’s good at this point, so if he sits and bets, say 20, then the guy with the Jacks is probably going to want to come along with this.

Now, the guy with the lower pair, with the smaller pair. He came in with the intention of getting a set. A set is three of a kind with two in your hand and one on the board. So since he didn’t get that, he’d probably want to fold this here. So now, this money goes into the pot, the other card gets burned, here it comes up. It’s a King. So now, this guy might want to bet again. Say he wants to bet 40, because he still an overpair to the board. The guy with the Jacks, right now. If somebody else had a King, he may have him beat. He’s going to think really hard about it. He says “Okay, well whatever. I came here to gamble.” So he ends up calling. Another card gets burned, river comes up the King.

All right, so now, with the Aces, the only thing he would be worried about is if he had a couple of Jacks or if he had a King in his hand. So say he’s afraid of the King, he decides to check. And then this guy decides to check, as well. So what ends up happening, the cards get flipped over and then, this is the best hand which beats his Kings and Jacks. So Kings with the Aces would take the hand.

Generally, if you have a really good hand, it’s a good idea to bet. Like a lot of times, new players will try to get really fancy and act like that you don’t have anything. And then, just spring traps on people. But if you’re new to the game, basically just bet out your cards. If the cards start going your way, then you will win. That’s a very basic strategy for Texas hold ’em. 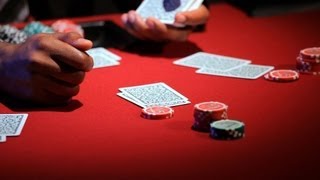