A general discussion of how much to “tip” in poker and how much it effects your winrate.

To submit your hand to the call-in show email Bart@crushlivepoker.com

►►► Keep learning with me over at http://www.crushlivepoker.com/ Sign up for my poker training & improve your poker strategy quick over on my site! We have a 30-day free trial just go here: https://goo.gl/r9K1Rq or use the code YTA300 at checkout. 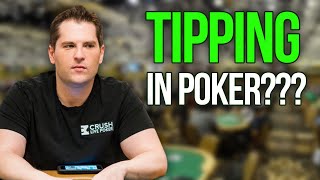 10 thoughts on “How Much Should I Tip The Dealers In Poker?”