Watch more How to Gamble at Casinos videos: http://www.howcast.com/videos/511514-How-to-Bet-on-NoLimit-Poker-Gambling-Tips

There are all kinds of ways to play poker. In this video, a gambling expert explains how to bet on no-limit poker. It’s up to you to work on your poker face.

Hey guys, I just wanted to go into the habit of playing No Limit Hold ‘Em, just the base rules of the game.

Here we got our players and we got our blinds posted 5 and 10. I’ve got the 2 cards face down, now in another video we talked about about limit hold ’em and like the betting restrictions there. In no limit there are no restrictions, which can be good or a bad thing depending on how you play.

Okay. Now here in no limit, you don’t have to bet 10 if you don’t to. If you want bet more than that, your more than welcome to. Another thing, a lot of players have heard the terminology ‘all in.’ What that means, is that he basically pushes it all in, and now he’s betting all of his chips. All players here started with the same amount, that’s just for the sake of making things simple here. So let’s see, he decides to call alright? So now everything matches up, alright. And in a hold em game, also in a cash game you don’t have to show your cards right away but in poker tournaments, if you ever see some tournaments that they’ll show on TV, they’ll actually have them turn the cards up. Alright, here. We actually have an interesting situation where there’s a king, jack, and a 10 but then both both players have a queen. Nobody else has like a higher card, so in this case here the best 5 card hand for both of them is king, queen, jack, 10 and 7. So in this case here, this is called a split pot. What happens here is that both players split the pot. Cards get swept up and we go to the next hand. And that’s No Limit Hold ‘Em. 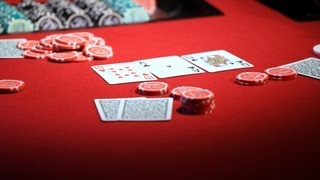