Rising poker star Sashimi takes on established TikTok super star Tommy Unold in this weekly poker hand. The hand has everything as a recipe for disaster as both players have a full house on the turn.

This poker hand took place on Max Pain Monday which is a show hosted by Hustler Casino Live. It encourages showing bluffs, slow rolls, running all-ins only 1 time and generally trying to cause as much pain to your opponent as possible. Is this the worst angle & slow roll in the same poker hand? Decide for yourself!

The hand starts with Tommy limping in early position. Sashimi in the next seat decides to raise to isolate him and Tommy calls. The flop already spells disaster for Tommy as he flops trip queens but is up against Sashimi’s flopped full house. Things go from bad to worse when Tommy turns his own full house which is where this poker hand starts to fall off the rails. Sashimi throws her hand across the betting line and then retrieves it as she apologizes. Tommy cannot find the fold button by the river and is noticeably distraught at this brutal bad beat. What makes this poker hand even more brutal is that Sashimi decides to slow roll him by only showing her queen first before delivering the finishing blow and revealing the jack that is just behind it!

Watch my video on Poker Bunny and decide whether you think she was slowrolling!: 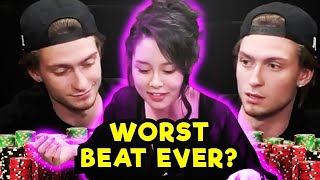 10 thoughts on “Is This The Worst ANGLE & SLOW ROLL In The SAME Hand?!”