Watch part one of this video here: https://youtu.be/78ffOC48lLk

What’s your style of play?

DAN COLMAN: How I play really depends on the players at my table, as well as my stack size and the payouts [in a tournament], because depending on if there’s a big pay jump and my stack is pretty short I might have to really be cautious and try to advance up the pay ladder. But when you have a big stack you can just put on a lot of pressure and win a lot of pots uncontested.

PAUL PHUA: And bully the table!

DAN COLMAN: Yeah, you get to be the table bully, which is always fun.

PAUL PHUA: I think most poker players would like to be a bully at the table, if you can.

DAN COLMAN: When you get the chance, it’s always nice!

PAUL PHUA: Yes, it also gives you so much advantage over other players.

DAN COLMAN: And sometimes, too, it gets to a point in the tournament where the table knows you are being a bully and just getting away with murder, but they can’t do anything because the payouts are in such a way. So it’s always fun.

IS THERE AN ADVANTAGE IN CHANGING YOUR PLAYING STYLE?

DAN COLMAN: Yeah, I guess it depends vs. different opponents and different player styles. Vs. some people I do want to switch it up every now and then, and zig when they think I’m going to zag, but then, vs. other players I like to just try and stay as balanced as I can and try to not let them be able to exploit anything I’m doing to the best I think I’ll be able to do. What’s your secret, Paul?

PAUL PHUA: My secret? Keep working hard. Even when you are successful, you work hard to improve your game. You know, there’s so much, you can never stop learning in poker.

PAUL PHUA: Yes, I think that’s the key. Spend hours, put more hours into your game, then you will see the results.

WHAT DO YOU THINK OF THE SHORT DECK GAME?

PAUL PHUA: I think for the cash games in the coming months or even years the short deck [Six-Plus Hold ’Em] will get more popular, because the short deck-game makes the luck factor more. Even beginners, businessmen, they can win more often in this type of game so it keeps them interested in coming back.

DAN COLMAN: Is the game more action than normal?

PAUL PHUA: Yes, definitely, a lot of action and people call more, whereas there is less 3-bet, 4-bet types of thing because if you have a connector you want to see the flop.

HOW DO WEAKNESSES DEVELOP IN YOUR GAME?

DAN COLMAN: I guess it’s really when, like Paul touched on, where you always have to be working hard and never just being “I’m good, I don’t need to work hard anymore, I don’t need to keep learning”. So I think weaknesses come from when you’re just not improving your game and thinking your game is fine, when you always have to be keeping up with the curve. The game is always evolving and you have to stay with it, you have to stay learning, stay hungry, and if you don’t do that then your game does have weak spots.

PAUL PHUA: Yes, and I think to be able to know what your weaknesses are, first and foremost, and to admit that you have a weakness, is quite critical. Then you go on from there. You work on it, try to eliminate that aspect of the game.

DAN COLMAN: I think, too, a big part is having friends that are very good players and even better than you to where you are telling them a hand or why you did something then they can be critical of it and say, “No, I wouldn’t do that, I don’t like your play”. Then you can think “Hmm, maybe you’re right” and then work on that. So it’s important to talk poker with other good players.

PAUL PHUA: And then if you have doubts you can ask for a second opinion, you know? 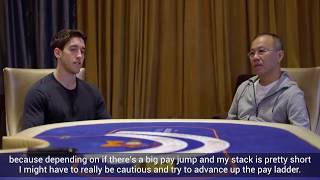