Watch more How to Gamble at Casinos videos: http://www.howcast.com/videos/511522-Basic-Rules-of-Roulette-Gambling-Tips

Tempted to try your hand at roulette? Learn the basic rules in this video. The next time you’re in a casino, you’ll be ready to join the action when the croupier spins the wheel.

Hi, guys. I wanted to show you how to play roulette. It’s actually a pretty
straightforward game. You have a table here; you’ve got numbers 1-36 and 0
and 00. You’ve got a wheel that matches all the numbers here on the board.
First thing you need to do is come up and get chips. You can use chips that
you may have had from another table from other gambling, but in roulette,
we usually use different color, non-denominational chips. This is basically
something, so that, everybody else could play all these different colors
and for the house to keep track of who to pay and who to take. When you
come in, usually you get a stack of, say, $50 or something like that.

The dealer gives you $50, and you’re ready to go. You could put your chips in any
spot that you’d like; table minimums are usually posted, usually they’re
about $5 or $10. In the case of a $10 table, what you will need to do is
keep in mind that there are two areas of the table. First, we have the
outside, which takes care of all of the 1-18 even/odd, black/red, and all
of the even bets. Then we have the first 12, second 12, and third 12, which
cover these respective areas. Also, we have a columns bet which takes care
of the entire column of numbers. That’s the outside. If you’re gonna bet
the outside, you need to bet the table minimum on each spot there. The area
inside, this is the fun part, here – the inside, you have to bet a total
of $10 at a $10 table, and you can put them any way you like. And the way
that the chips go, you can put them on any single number, or you can put
them on any series of numbers, to cover certain areas that you may want to
cover.

The more numbers that you cover, the better your chances of winning, but
the less you’ll actually get paid. And the way that it works is as follows:
if you’re betting on any one of these here, odd/even, high/low, black/red,
they all pay even money. If you’ve got 1-18, number 14 comes up,
you get paid even money; one to one. If you were playing one of these
numbers here, say if you’re playing second 12, and the ball lands on number
17, then you would win here, but then it pays two to one.

Also, if you have a bet down on the columns, it’s the same thing. If 15
comes up, and it’s in this column, this gets paid two to one. And inside
numbers is where it gets a little more interesting, where you can bet a
number straight out. Say, if number 13 comes up on this bet, you get paid
35 to 1. You could also put them on the line, to signify that you want to
put money on more than one number at a time. This chip here, it covers 13
and 14. This is a two-number bet, this pays 17 to 1. The same would be
here, which covers 7 and 10, or here, which covers a single 0 and 1. Also,
if you wanna bet on three numbers at a time, you can do that. This is
called a streak, where you have the money on 10, 11, or 12 – any of
these numbers comes out when you’re betting this, it gets paid 11 to 1.
Also, the number three bet which we have here is called the “basket,” which
is a 0, 00, and 2; it’s the same thing, if one of these numbers comes out,
it gets paid 11 to 1.

And then last, we have what’s called the “line bet,” which is these six
numbers, and when you have them in a line like this, this covers 13-18, and
if one of these numbers comes out, it pays 5 to 1.

And, basically, what happens is that people will put their money on a whole
bunch of different numbers, and then see the guy here, who wants to put,
like, 10 all even, and he wants to put a whole lot on the second 12. And
what happens, spin the wheel, dealer waves no more bets, and
we find out that the number was 20 – which covers this bet right here, so
then losers get wiped off the table, and as it turns out, those are both
even, and it’s in the second 12, which would pay 2 to 1. So, that’s his
money. I’ll just count this out. So, it would be 20. In the case that
the dealer doesn’t have enough chips, then they would pay you
in cash. These chips that you can take to any other table. That takes
care of that. And then these bets 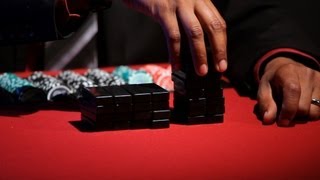