Watch more How to Gamble at Casinos videos: http://www.howcast.com/videos/511510-Basic-Rules-of-Texas-Hold-em-Gambling-Tips

Want to learn how to play poker? In this video, a gambling expert explains the basic rules of Texas Hold ’em. It’s up to you to work on your poker face.

Texas Hold ‘Em is one of the most popular games in Poker today. It’s played in card rooms all over the world and home games all over also. I just want to go over the rules of Texas hold ’em with you.

First you need a table. Get some players with you. The first thing that we do you either put up an ante or a blind. Basically there are two ways of forcing action. An ante is where every player at the game would put in a certain amount. In this case five dollars that automatically goes in the pot.

Blind is a little different where the two people next to the button, which I’ll explain that in a second, would put one small one and one big one.

This is just to make sure there’s something going on in every hand because otherwise if people don’t like the hands and everybody just keeps folding no money changes and it’s kind of boring that way.

The dealer button, if you’re in a home game you can play this with your friends and generally the deck would be passed around from player to player to player and everybody would have a chance to deal. In games where you’ve got the dedicated folks, like myself, then the dealer represents that deck being in the player’s hand and then the dealer takes care of all the action.

Here we’re going to have blinds of five and ten. Players get two cards dealt face down. Dealer doesn’t play. Then everybody will check their hands making their bets or decisions based on what their hand strength was. So the big blind, that’s the minimum that people would have to bet to commit.

Here, say they want to bet ten. This guy doesn’t want to play for whatever reason so he folds the cards, they come in my way. Then he wants to bet. Now, as the big blind he already had ten dollars in he has the option, he could check, basically making an additional bet of zero, or he could raise, and we’ll go into raising in the next hand – the next round here. So he decides to check, his money goes in the pot.

One card gets burned, this is just a security thing. Back in the days of Poker where people, like in the Wild West, used to cheat and they’d be dealing from the bottom of the deck and things like that. The card burned on the top makes it a little harder for somebody to cheat at the game. So that’s just a security measure that’s been added to every game.

With the community cards there now have the option they can bet again. Say this guy wants to bet ten. Now he can bet, or he can fold. Say he decides to raise. So now he’s going to tell everybody at the table he’s raising. Then he wants to put out twenty. Now the player here has to either put in twenty or fold. Now the gentlemen here has to put at least ten or fold.

Say he decides to call, which is matching the twenty, and the player here decides to do the same. Then this goes in the pot as well. Another card gets burned and we’ve go the fourth card, this is called the turn. It’s another community card that everybody at the table can use.

Say for the purposes here that everybody just decides to check. Everybody wants to check. He checks so he bets nothing and then they’re just kind of following along. In the case that nobody bets then the fifth card, which is called the river, and that’s it for me and the card. Then players get the option that they could check or bet.

So say somebody wants to bet ten and let’s just say that these two guys decide to call. This money goes into the pot and now the players here get to show their hands. In this case he’s got an eight and a two so he doesn’t make any pairs. In the case here he’s got an ace, but then he’s just basically playing for high card because he doesn’t have a pair. Then the player here, he’s got a pair of nines. So this would be the best five card hand he could make with a pair of nines, ace, queen, jack. The cards would be swept up and the pot would be shift to the player. Then the button goes to the next player here and then play would continue.

That’s how you play hold ’em. 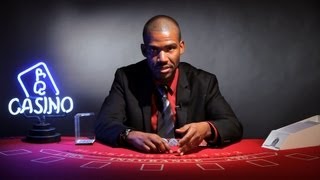