What poker strategy you should apply when Facing MASSIVE Overbets? I’m beginning to see these massive overbets more often in poker in 2018 and I wanted to share my poker strategy and make a video with how you can outplay the competition when faced with tough decisions like these. In this spot, the Hero in the hand faces a 6x overbet on the river. What should he do? What would be appropriate poker strategy in this cash game? How does he put the Villain on a hand range? I share my in-depth, step by step process in this brand new ‘Hand of the Day’.

If you liked my style of analysis on overbetting, check out my FREE “Hand Range System” where you’ll get access to the exact methodology I use to make each and every decision at the poker table:
http://bit.ly/HandReadingSystem
🎁
Get a Free Trial of our Membership Program: http://bit.ly/CPMembershipYT
🎁
Looking to improve your preflop play? Don’t know when to overbet? Get my FREE ‘Quick Start Guide to Preflop Play’ (which includes 10 preflop charts), where you’ll learn which hands to play from which position, how to adjust to your opponents and maximize your edge.
http://bit.ly/preflopcharts

Something you should definitely check out:

The 4 Things You MUST Do Before a Poker Session!

The poker hand EVERYONE is talking about!

How to Put Your Opponents on a Hand Range?

The Best Way to Get Started in Poker in 2019

Cash Game Poker Strategy: Don’t Play Your Poker Hand: Do THIS Instead!

On this channel I regularly analyze some of the biggest hands of poker played on high stakes cash games like Poker Night in America, Live at the Bike, Poker After Dark and High Stakes Poker or tournaments like the World Series of Poker, World Poker Tour and European Poker Tour featuring legendary poker players like Doyle Brunson, Tom Dwan, Antonio Esfandiari, Phil Ivey, Gus Hanson, Phil Hellmuth and Daniel Negreanu.

I also pick hands which are sent to me from readers like yourself to give you actual feedback on your specific questions. 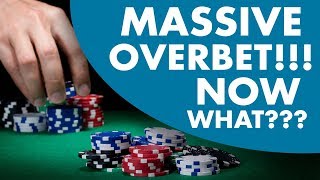