Learn to Play Poker in no time: https://www.youtube.com/playlist?list=PLLALQuK1NDrh8fn1zxL3e8i_fjYi0e_0_

Our poker tutorial is a great way to learn the card game loved by millions. /515010-How-to-Raise-Poker-Tutorials

First, you have to identify when you can raise and when you can’t. It’s very common for poker players to misuse the terms “bet” and “raise” because it is slightly confusing. Because you see pre-flop, the blinds are forced bets so you can’t bet. The first aggressive action is a raise. However post-flop, there are no blinds and no forced bets, so the first aggressive action is a bet.

Pre-flop you can raise anytime you’re first to act or it’s been folded to you. If somebody raises in front of you, then you can still raise, however it’s called a re-raise also known as a 3-bet. If someone were to raise in that bet, it would be a re-re-raise, also known as a 4-bet.

Post-flop, in order to raise, someone else must have bet first so either they bet before you acted or you checked and then they bet giving you the opportunity to raise. Post-flop on the flop, turn, and river, you can only raise after someone else has bet first. So it requires your opponent taking an action before you have the option to raise.

However, effectively making a bet accomplishes the same thing as a raise. The idea is to increase the wager to force your opponent to make a decision–either stay in the hand or get out. 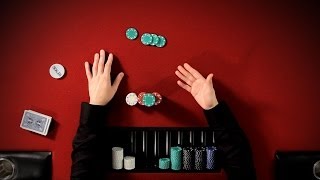 5 thoughts on “How to Raise | Poker Tutorials”