Godmoding this tournament all the way to the final table, collecting bounties and taking no prisoners.

Want to get better at poker? Learn alongside Lex as he gets coaching on all the most important spots in poker: https://bbzpoker.com/product/lex-bundle/?ref=38 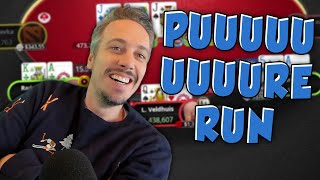 10 thoughts on “Running LIKE GOD in this tournament ♣ Poker Highlights”