Hi. I’m professional poker player, Nicky Numbers, and I’m going to explain how to bluff. Before you can learn how to bluff you have to first know what a bluff is. A stone cold bluff is a bluff that’s made with no hand and no draw, meaning your hand has no equity into itself. Your hand is not going to win if you continue and you don’t have a draw as backup. That’s a stone cold bluff. Stone cold bluffing should primarily be reserved for poker tournaments, where you have to make moves regularly in order to win. In cash games outside of continuation betting and firing second bullets, stone cold bluffs can primarily be avoided.

However, all forms of bluffs, including semi bluffs, which are aggressive actions that are taken with a draw like a straight draw or a flush draw as a backup in case your aggressive action fails you may hit your draw and improve to a strong-made hand, are going to be most effective under the same types of criteria. The single biggest factor is how many opponents you’re up against. You can regularly make a single opponent fold. You can sometimes make two opponents fold. But it’s very, very difficult to make three or more opponents fold without the play of a hand. So, when you’re bluffing, you really want to focus on situations where you’re against a single player.

There are a few very important Do Not’s with regards to bluffing. You do not want to bluff in big, multi way pots. The more opponents you’re up against, the less likely an aggressive action is to succeed. You also want to avoid bluffing in situations where your opponent has taken multiple aggressive actions post-flop. They bet on the flop, and the turn, and the river. Or, they’ve raised on the flop and bet on the turn. The more aggressive actions your opponents have taken on the flop, turn and river, the greater the likelihood that they’re not going to fold. And as is true at any point in no limit Hold’Em, it’s critical to know how many chips you have in your stack and how many chips you’re opponents have in theirs so that you can take into account when you’re choosing to bet or raise. 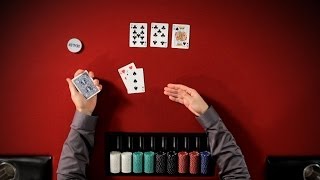 10 thoughts on “How to Bluff | Poker Tutorials”