Watch more How to Gamble at Casinos videos: http://www.howcast.com/videos/511513-How-to-Bet-on-Limit-Poker-Gambling-Tips

There are all kinds of ways to play poker. In this video, a gambling expert explains how to bet on limit poker. It’s up to you to work on your poker face.

Hey guys, I just wanted to go into how to play a Limit Hold ‘Em. Basically, we’ve got about three players here and we have lines posted of five and ten. Everybody’s gonna get their cards and here the big blind is ten so that’s what he’s gonna have to bet as a minimum. So say he decides to bet the ten and now the gentleman here, he’s gonna want to raise. The thing with the Limit Hold ‘Em, is that he can only raise a fixed amount, alright? In this case
you can only bet another ten.

So now if he wants to call, he’d have to bet another ten. And is he wanted a re-raise, he can, but he can only do in another ten dollar increment. So he decides he wants to go along for the ride, he’s feeling lucky also. We make this pot, card gets burned. 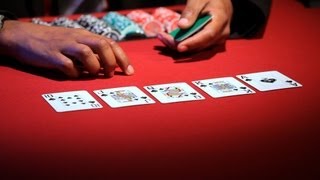 10 thoughts on “How to Bet on Limit Poker | Gambling Tips”