Watch more How to Gamble at Casinos videos: http://www.howcast.com/videos/511516-How-to-Play-5Card-Draw-Gambling-Tips

There are all kinds of ways to play poker. In this video, a gambling expert explain how to play 5-card draw. It’s up to you to work on your poker face.

Hey guys, I just want to show you how to play Five Card Draw. It’s not poker game that you’re going to find in any casino. It’s more of a home game and an old bar/saloon type of thing.

Basically, we’ve got four players here. Every player gets five cards face down. There’s never a dedicated dealer on this game, it usually gets passed around the table. So, I’ll act as this player here, lift the hand so you can see what I’ve got. So, basically there’s a round of betting first up, so I’m going to move these over here. This player’s first so, so he wants to bet 10, then everybody else can call. They can fold, they can raise. It can be played limit or no limit, that’s really up to you. So, say he wants to raise to 20, and say, it’s really not that good, but why not. Alright, and everybody else wants to call. Alright, so this all now goes into a pot.

Now everybody’s got their hands, now they’re set, because there was a draw and you know, I could put the cards down. Now there’s another round of betting, so we’ll just say everybody wants to bet 20, and everybody calls. This all goes into the pot and now whoever has the best hand wins. 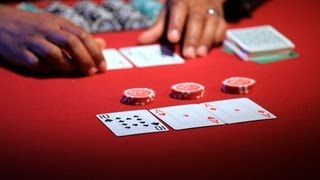