Watch more How to Gamble at Casinos videos: http://www.howcast.com/videos/511534-Playing-the-22-Inside-Strategy-in-Craps-Gambling-Tips

Ready to roll the dice and play craps? In this video, our gambling expert explains how to play the “22 inside” strategy.

I wanted to go over the 22 inside method of craps. I won’t call it a system, because you know, that implies that it works all the time. Which you know, anybody that tries to sell you on a system is probably lying to you. But this is a method, it actually works pretty well for me. And it’s one that’s designed for you know, for players to capitalize off of you know, what they call a hot shooter, somebody throwing a whole lot of rolls. You know, sometimes they’ll make a point here, and there whatever, and they just keep rolling, and rolling, and rolling, and rolling. It works out very well for this.

You can bet the inside pretty much whenever you’d like, you can do it on the come out roll, people normally don’t. They’ll wait till they are out on a point for sake of conversation I’ll just say we’re out a 10. So what happens, you bet the 22 inside, and you throw the money into the dealer, and he’s going to put the chips where they need to go. Sorry. And now your 22 is inside. The idea behind this is that you want the shooter to make at the very least 3 points.

So, say he rolls a 9, remember from an earlier video, I said it pays 7 to 5, so you’re going to get your 7 dollars. And I’ll just leave that there for right now. And then the next roll, say its an 8, it’s gonna be 7 to 6. And say a 5 comes up, and then that’s going to pay 7 to 5. So now here, you have 7, 7, 7, from your three rolls, and that’s $21.00, you put 22 in. So you’re for the most part, even already. So from this point, now if somebody were to roll, say another 9, then you have the option, you always have the option, you could raise or lower your bets with the dealer, so a lot of times people will, you know, they’ll say press. And pressing a bet basically just means that, you just going all, you know, as high as you can with it, and then the change would go back to the player, so now you have 10 dollars on the 9.

So now here, you’ve got $23.00, so now you’re actually up. So say if the 9 comes up again, you have the option, you could toss the dealer a dollar, he’ll give you 15, or you can pump your bet up a little bit more, and then you could basically just start stacking then up. And when you get to the point that you feel comfortable, and I can’t tell you what point that is, you have to figure that out on your own. But when you get to the point where you’re no longer comfortable with the amount of money at the table by all means, you could take everything down, just let the dealer know before, the shooter rolls. And now the money that you put out as an investment, is now your profit. Then if the dealer 7’s out, it doesn’t even matter, because you’re not anywhere on it. And now that is the 22 inside method of craps. 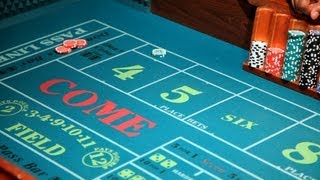