Craps is a new game from Pokerist. You are able to enjoy some of the most realistic 3D graphics and physics of social casino games on mobile platforms.

Rules (short version): The game is played in rounds. Each round has two phases. In the first phase, which is called the Come Out, the shooter rolls the dice until they get a 4, 5, 6, 8, 9, or 10, this number is called the point. The second phase is called Point. In the second phase, the shooter rolls the dice until they get their point again, or until they roll a 7. Then the first phase of a new round begins.
(For the complete set of rules, please check out the information provided in the Pokerist application). 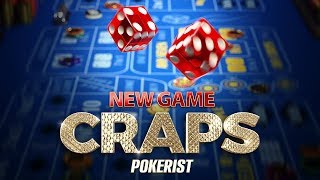