Because, hey, it’s a lot more fun than Strip Solitaire.

Step 1:
Pick a gambler’s game like five-card draw, which has three rounds of betting.

Step 2:
Agree on rules. Like the order in which clothes have to be removed. And whether or not jewelery counts.

Step 3:
Have everyone ante up an initial bet, like a single article of clothing, before the cards are dealt.

Step 4:
Starting with the person to his or her left, the dealer gives each person five cards, face down.

Step 5:
After everyone looks at their cards the person to the dealer’s left begins the round of betting, stating the number of articles of clothing they’re willing to wager. Everyone follows, matching the bet, raising it, or folding.

Tip
In some games players start out with a small amount of money and must resort to their clothes if their cash runs out.

Step 6:
When the betting is done players get to trade in up to five cards.

Step 7:
After everyone receives their new cards, there’s another round of betting.

Step 8:
Once this final round of betting is completed, players show their hands. The losers have to pay up, or strip down.

Step 9:
Continue dealing and playing hands until everybody except one person is smiling sheepishly in their skivvies… or less!

Did You Know?
Did you know? The first computer strip poker game came out in 1982. 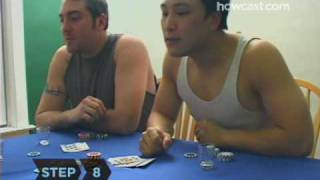 10 thoughts on “How to Play Strip Poker”