Do you know how to play the game of poker? If so, can you play it in English? After watching this fun lesson, you will be able to play a game of poker or any other card game using English vocabulary. You might also be surprised to know that this vocabulary appears in movies a lot! I will teach you the card names, suits, and the names of some combinations to help you win! You will learn the meaning of “bluff”, “royal flush”, “full house”, “poker face”, “three of a kind”, and more. So grab your best lucky charms, and get ready to play. Good luck!
Take the quiz on this lesson at: http://www.engvid.com/vocabulary-expressions-for-poker-and-other-card-games/

So, the first thing that we need to know about poker is it’s a game. Woo-hoo. It’s become very, very, very popular online because you can get a lot of money. The way I learned to play poker was my father taught me, after many a grape soda, sitting around the kitchen table, betting matchsticks. So, welcome to my childhood. I learned how to play poker. What did you do?

The most important thing is to learn the name of the cards in English. So, probably you know: A, K, Q, J, 10, and the numbers, but these actually have names. The “A” is the Ace. The “K” is the King. The “Q” is the Queen. The Jack is the “J”. Then it goes from 10 all the way down to 2. There is no 1. Sometimes the ace can be used as a 1, but that’s too complicated, and I’m not going to tell you my tricks. Well, you’re going to lose anyway, so might as well.

The other thing that we need to know is what to call the cards. So, these are suits. Not… Suit? Suit, suit, suits… Suits, they’re called… I don’t know why they’re called suits, they’re just suits. So, the suits means: Hearts, diamonds, clubs, and spades. Now, when I was a child, I had a very stupid brother. Still do. Mm-hmm. And for some reason, he said shovels. Okay? It’s a spade, buddy; not a shovel. Get it right. Okay? So, hearts, diamonds, clubs, and spades are the proper names of these. So, now you know the vocabulary of the wor-… Of the cards. I’m going to teach you some verbs that you need.

The first one probably you know, is a bluff. “Bluff” means you have a face… Oh, Lady Gaga go away. Mm-hmm. Poker Face. Do you know what that means? “Poker face” means you are expressionless. Usually you have a baseball hat, so people can’t see your eyes. But a bluff is when you do not let your face show your cards or what you’re doing. So, if you’re betting money or matchsticks and you want to bluff, you’re going to pretend that you have a fabtabulous hand. Now, “the hand” means what cards you have. So, I’m going to pretend that I have the highest cards ever, called a “royal flush”. So I would not make expressions with my face, and I would bet a lot of money. I would be bluffing, because maybe I have really, really bad cards. I always have bad cards. So, “bluff” means to, like, lie and pretend you have really, really good cards.

The most important word is “bet”. “Bet” means you put in money that you’re going to lose or win, depending. Before they even deal the cards-“deal the cards” means you give them to people- there’s something called an “ante”. An “ante”, not your mother’s sister, means a forced bet before the deal. So, if we were playing cards or playing poker, and I have lots of money, I would ante $100. I would never do that. And then everyone else that wants to play would have to put in, automatically, $100, even before we look at our cards. Scary.

What happens is we have the first bet is called “open”. So, it would be my turn, I could open, which means I would put in money; or if I did not want to, I could “check” or “pass”. This means I don’t want to play with money. I’m just like: “No. Enh, we’ll see what happens.” If I have a really, really, really terrible hand, which means my cards are not good, I would do what’s called “folding” or “fold”. I would say: “Fold.” Fold means: “This is terrible, I’m out. I end the game. I’m no longer playing this.”

When you bet, you can “call”, which means you match what the other person has bet. For example, if the person before me bet $10, I would call, and I also would put in $10. If I wanted to get more money from people, I would “raise the pot”, which means I would put in my $10, and I would add more money. So, if I had a really good hand, I would say: “I call the 10, and I raise you 50.” So the other people playing, if they wanted to stay in the game, would have to put in $50. 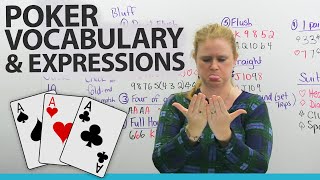