Scott Clements has a unique poker origin story, having been so infatuated with the game that he overpaid for his buy-in into the World Poker Tour Canadian Poker Open event. Despite the bad bankroll management decision, he managed to lead the tournament wire-to-wire and emerge with a win. That tournament gave him an automatic entry fee into the WPT North American Poker Championship, which he also won, this time banking $1.45 million.

In addition to his two WPT titles, Clements also has two World Series of Poker bracelets. He earned the first in the 2006 $3,000 Omaha eight-or-better event, and the second in the 2007 $1,000 pot-limit Omaha event. The Washington-native has come incredibly close to more bracelets in the years since, with numerous final tables and six runner-up finishes. In total, the 37-year-old poker pro has nearly $7.8 million in lifetime live tournament earnings, along with another $4 million or so won online.

Highlights from this interview includes a strict gym regimen, buying a house while still in school, cards games with family, expensive nights of 4-5-6, hosting the home game without knowing the rules, running up his first online deposit, getting knocked out by Maria Ho in his debut, a disputed World Poker Tour win, buying into a sold out tournament, ignoring the money on a seven-figure score, an early knack for Omaha, where he keeps his bracelets, dealing with close calls at the WSOP, the 100 McNugget challenge, how he backed into a piece of Martin Jacobson’s main event win, where he got his work ethic from, flipping drug houses for profit, and the many ways he has earned stitches. 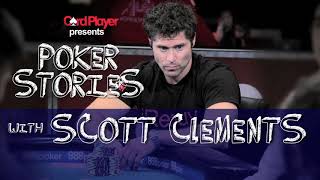