Rampage Poker aka Ethan Yau has risen through the poker ranks in a very short period of time. A few years ago he was grinding $2/$5 games and recently on this Hustler Casino Live stream he found himself sitting with over $318,000!

It was inevitable that he was about to play the largest poker pot of his career and this is that exact poker hand! Over 400 people invested into his bankroll for this stream and all of them were watching live on the Hustler Casino stream.

Jonathan discusses what poker hands should typically be in a 4-bet bluffing range preflop and why a hand like JTo can often be dominated and could get you into problems further down the line! He discusses why you should often consider reducing the stack-to-pot ratio (SPR) when you are playing out of position and why flat calling 4-bets in position is often the more optimal play.

Jonathan picks up on a few live reads that Ben gives off. A snap check-back on the flop and then a very casual splashy bet on the turn can often indicate a hand that is extremely strong. One of the oldest live tell reads in the game is that weak means strong and strong means weak!

The hand starts with Blank Cheque Ben who opens the hijack with JTo. A high stakes regular Double M decides to flat in the cutoff with Q9s before Rampage decides to bump it up with a 3bet from the small blind holding the second best hand in poker – pocket kings! Ben puts on the pressure by throwing in a 4bet and Rampage decides to just flat call. The flop is a disastrous one for pocket kings as it comes down ace, jack, jack. Now there are not many hands that pocket kings are beating when faced with Ben’s 4-bet preflop. Can Rampage Poker find a way to lose the minimum? 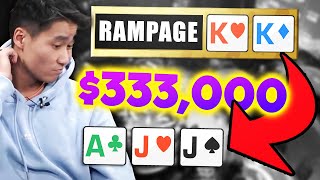