I am delighted to have Sam Trickett giving his poker tournament tips in the first of a brand new series of video interviews with the top poker pros. They were filmed for the Paul Phua Poker School in beautiful Montenegro, at the Maestral Resort and Casino, during the Triton Super High Roller Series tournament in July, 2017.

The video is the first part of our discussion about poker tournament strategy; the second can be watched here https://youtu.be/yP2D2Rf_EBI

How do you adjust to different stages of a tournament?

Sam Trickett: It depends. A lot of people ask me, like, a general strategy on how to play a tournament, but I think it depends on your table. It always depends how your table is playing. You can’t just go and say, ‘This is how I’m going to play, I’m going to play really tight, really good hands.’ You know, if the whole table is playing tight then you should probably play looser. So I don’t generally have, like, a strategy to going into a tournament, I like to sit down and see the table. But, you know, when you play deep-stack poker it’s good to have different hand selection to later on. For example, suited Aces and small pairs and these types of hand are more valuable because they win big pots. And, you know, hands like Jack-Queen offsuit or King-Jack offsuit, it’s hard to a win a big pot in early stages of tournaments. So hand selection is a big part of the game in the early stages when the stacks are deeper. But generally, I think you just play according to the table.

Sam Trickett: Paul plays a lot of cash as well, so he generally picks the right hands to play because he’s generally playing deeper-stack poker anyway. That’s probably your strongest part of the game, actually, is your deep-stack poker, right? And then when it gets short-stacked is where you have to adjust the hands you play.

When you’re short-stacked, what is a good time to go all in?

Sam Trickett: Depends. Depends who’s in the blinds, and depends, you know, what stacks they have to the left of you. You know, if you had Winfred [Yu] in the big blind, and two tight people, you’re more likely to go all-in with a wider range. But, like, good players with big chips on your left, less likely to go all-in. So it all depends on your table I think, right?

Paul Phua: Yes, the dynamics are changing all the time.

Sam Trickett: Yeah, there are lots of different things you have to take into consideration.

Paul Phua: Even if you have 16 big blinds compared to 14, you play differently I think.

Sam Trickett: Exactly, yeah, different hands that you should go with and shouldn’t go with, so it depends.

How would you play with a dominating stack?

Paul Phua: I think if you have a dominating stack you open more, you 3-bet more.

Sam Trickett: Generally people won’t want to play pots with you because you’ve got a big stack and you can afford to take risks. You’re going to be more aggressive in general, so it’s like… generally you open more because people don’t play back at you as much because you have a big stack.

Paul Phua: And a shorter stack has a narrow range to re-raise you or call you.

SamTrickett: Exactly. Because you have a lot of chips, it almost puts them off doing it because you can afford to play pots. So yeah, when you have more chips, like Paul said, you need to open up and play more aggressively. 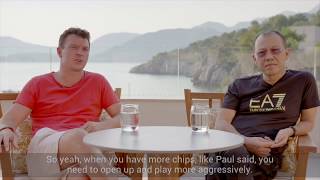