Freddy Deeb took down his first pot, happy to get one. Mike out in front with two sixes, but the heat’s getting put on him pretty strong by Freddy. How much more can he stand? Now the nine of spade comes off. No help to either player. And Freddy’s just going to wave the flag and give up the pot.
Mike takes down his second pot. Mike Shariati takes the chip lead in the beginning, but later on Freedy wins a pot with a bad hand, we didn’t see that coming! It’s a back and forth in this heads-up battle. Will it be Mike or Freddy who wins it all in this epic high stakes tournament? 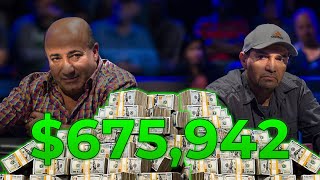 9 thoughts on “The River Card that Kept Him Alive – Who Wins it All?”