In the latest episode “So That Happened,” Sasha Salinger of PokerNews breaks down all the latest scandals and gossip in the poker world, First up, poker player Sam Grafton publicly shames Ramon Colillas for allegedly not tipping after winning the $25K PokerStars Players’ Championship for $5.1 million. Colillas won a Platinum Pass, which included free entry in to the tournament as well as $5K in travel and accommodations. If you won a free entry in to a poker tournament and won $5 million, would you tip?
Next up was the uproar over poker player Daniel Negreanu’s tweet. He described the top 5 worst qualities a poker player can have and the poker world was not happy about it. Dara O’Kearney wrote an entire blog post about Daniel’s tweet and included a photo of Daniel Negreanu in blackface. WHAT?! Watch to see how Daniel Negreanu responded.

Don’t forget to tag @SashaSalinger on www.Twitter.com if you see anything that could be good for next week’s edition of “So That Happened.” 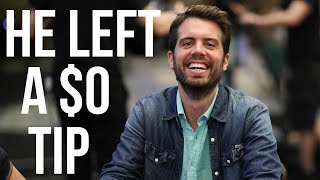