This video is part 2 of our introduction to the poker rules and procedures that professional poker dealers have to learn. It takes the poker hand rankings that are explained in part 1 and builds on them by going over an example hand for the three basic types of casino poker: texas hold ’em, omaha hold ’em, and 7 card stud. The topics covered here are the same as what you would learn in a poker dealer school.

Texas Hold ’em, often referred to as “hold ’em” for short, is dealt out by giving 2-10 players two cards apiece, dealt face-down, and then dealing five community cards that all players share. To determine a player’s five card, poker hand, combine a player’s two card starting hand with the five community cards. Out of those seven cards, the best five are the poker hand that counts.

Just like in Texas Hold ’em, the dealer burns cards and brings a flop, turn and river.

To determine a player’s five card poker hand, use the best 5 card combination possible out of the 7 cards that player was dealt.

Betting rounds are a part of every type of casino poker.

There are two fundamental concepts in poker that most of the rules in poker are created from:

Cards Speak – The only thing that entitles a player to win a pot is their cards. That does not mean they have to be the best cards since everyone else may have folded.

One Player Per Hand – No one may help a poker player make any decision about their hand. They must play 100% on their own.

I deal each of these poker hands as examples. 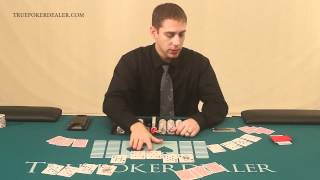