You might be forgiven for thinking that most hands of Texas Holdem Poker are won and lost after the flop cards get turned over. Paul thinks not. It’s the Pre Flop Strategy that will decide very often whether you get a good chance of winning the pot, not what happens later on in the hand.

Paul Phua thinks that the outcome of most hands of poker are decided before, not after, the dealer deals those 3 community cards onto the table. Pre Flop Strategy is king he thinks, not Post Flop.

The hand begins of course with the two cards you are dealt right at the beginning of the hand. These are called the pocket cards, or hole cards. If you are dealt good hole cards, say for example a pair of kings, or 9 and 10 suited, your instinct as a beginner is to try to keep as many people in the game as you can, because that means a bigger pot for you when you end up winning right? You might do that by not betting aggressively, by calling, or just making very small raises to give the impression that you don’t have great cards. You think that means that other players won’t be scared off, and will stay in the hand to the flop and beyond, so you then have a great chance, you think, of winning the pot at the end of the poker hand. Now you may end up winning the hand, of course, especially if the flop improves your hand even further. For example, if a third King appears to complement your pair of Kings.

The problem is though, that Paul Phua thinks that it’s even more likely however that you will end up getting your fingers burnt. That the more people stay in the hand, the more chance there will be that your good initial hand becomes beatable by the time the river card gets turned.

Here’s a scenario that should make you think hard about Pre Flop Strategy, Paul says. Say you are dealt a pair of Aces at the start. A beginner’s eyes will light up, they will hardly be able to contain their happiness probably! However, even if you are dealt a pair of Aces says Paul Phua, they aren’t invincible. Far from it. Those Aces, as the saying goes, can be cracked. Another player can get a flush on the flop for example, or get another two 5’s on top of the 5 already in their hand. Lots of things can happen. Paul Phua thinks you should be aggressive in your Pre Flop Strategy, and try to get as many players to fold and therefore step out of the hand as soon as you can.

Mix up your play is another bit of advice from Paul Phua. Be cautious sometimes, aggressive at others. Try not to give people a pattern of your behaviour. Send mixed signals in your poker play.

One last piece of advice from Paul Phua is to think of the occasions when you make a bet as an investment. Is the bang worth the buck? Is the money you have to pay to see the community cards worth it? Will you have to risk too much money to see the flop? Or is the investment actually quite small. Make those calculations.

So Paul Phua’s message is, concentrate hard on your Pre Flop Strategy, because a lot of hands are won and lost in the first moments of the hand, not the last ones.

One thing I like to do is to change up my play, send out mixed signals, so that I am hard to read over the course of a game. So sometimes I play tight, and only bet on my good hands. Sometimes I play a bit looser, more aggressively. Then I will bluff a bit too. It depends on how good the other players are. But I like to mix up my game so other players find it hard to get a read on me.

If you are dealt a good hand in the hole, one mistake a lot of amateur players make is not scaring off other players. They try to keep to many people in the hand. If I have good hole cards, then usually I try to make a reasonably big raise before the flop. I hope to play heads up against one player rather than many players. If you get dealt a pair of aces at the start, then you don’t want four people still in the game on the flop, as the chances of your aces being cracked is much higher with 4 people in the pot than with 2 players.

Another important thing is to always remember how much you have to pay to see the flop.

Sometimes I fold good hands, if my opponent who has re-raised me is short stacked. Because it will cost me more money to get see the flop, and then if I win, I am only going to get a small pot. It isn’t worth it. But say if it costs me only 3 big blinds to see a flop when my opponent has 80 big blinds or more, then it is much better value. Always evaluate the stack of your opponents and how much it will cost to possibly win his whole stack. 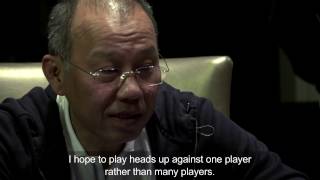