Phil Hellmuth is having a rough day at the office. He’s already had a few controversies and meltdowns on Live at the Bike, and this time he’s doing both simultaneously. When Nick Vertucci runs a big bluff on Phil, Mike Matusow seemingly tries to help him out, but in the end only serves to set the Poker Brat into a steaming rage.

Take your poker game to the next level at Upswing Poker: https://upswingpoker.com/

Live at the Bike: https://www.liveatthebike.com/ 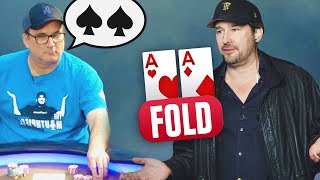 10 thoughts on “(SCANDAL!) Phil Hellmuth Erupts At Matusow After Being Told His Cards”