In this video I show you how to win and play 3 card poker in the new casino dlc. How to play 3 card poker you might ask? It is simple, dont forget to check out the hand rankings but I also talk about the best strategy to win at 3 card poker. The casino dlc diamond resort is by far the best dlc on gta online to date. 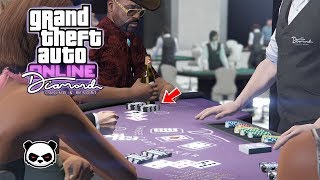