In this hand the river gives us a set but also brings in the flush and a four straight. Should we bet for value and for what size?

If you want to call in with a hand or question for Bart use the number 3233481281. The show streams live each Monday at 4:45 P.M. PT. right here at youtube.com/c/crushlivepoker. To keep updated of schedule changes to the live stream follow @crushlivepoker on twitter.

To get the best in live poker training check out CrushLivePoker.com. Use the code YTA100 for the first month free. 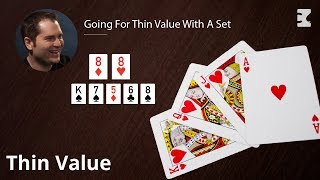 6 thoughts on “Poker Strategy: Going For Thin Value With A Set”