By founding the World Rock Paper Scissors Society, Graham and Douglas Walker hoped to promote Rock Paper Scissors as a fun and safe way to resolve disputes as well as a competitive sport. However, when thousands of RPS fanatics converge on the World RPS Championships, they’re caught between big business, talk show pundits, Playmate mascots, and a battle of good versus evil that asks the question: Can purity beat commerce? Rock Paper Scissors: A Geek Odyssey dives headfirst into an extreme subculture and tracks the evolution of RPS into a legitimate sport of skill and strategy, worthy of training and competition, culminating with the World RPS Championships. It is an intimate look at some fascinating people who have devoted themselves to this game and turned it into a world of their own. As we navigate our way through outrageous characters, hilarious strategies, fascinating arguments and heated competition, one thing becomes absolutely clear: RPS is much more than a game, it is a lifestyle.Take a good sense of humor and a rock & roll attitude, combine it with the suspence of your favorite sporting eventand put it all on top of a surprisingly intelligent foundation – and you have “Rock Paper Scissors.” While it may sound likea mockumentary, these people are definitely real, making this story both fascinating and highly entertaining. Director Mike McKeown first learned about the wild world of competitive RPS while living in Toronto. Stumbling upon an article about the 2002 RPS World Championships, he couldn’t believe this incredible sub-culture was headquartered merely blocks from his own house. After a couple beers with the Walker brothers and an epic battle of RPS for the exclusive rights to tell their story, Mike knew he had a gem on his hands. 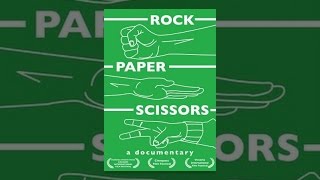