No-Limit Texas Hold ‘Em is the Rolls-Royce of poker, the game the big boys play, the game the World Series of poker is all about—the game you want to play.

Step 1: Choose dealer
Choose a dealer for the first hand and denote that person with the dealer button, placed on the table.

Step 2: Shuffle & cut
The dealer shuffles and cuts the deck of cards.

Step 4: Deal cards
The dealer deals two cards face-down to each player. Everyone assesses his or her hand, and the first round of betting follows, beginning with the player to the left of the big blind and continuing clockwise.

Tip
Each player’s two private cards are called his or her “hole” or “pocket” cards.

Step 5: Bet or fold
Each player can call and/or raise the blind bet, or fold their hand. In no-limit games, any player can also go “all-in”—staking all their remaining money or chips at once. It’s this chance to win big or go bust that brings No-Limit Hold ‘Em games their reputation for high stakes and higher drama.

Tip
Drawing a Two and a Seven in different suits is considered the worst possible starting hand for a game of Texas Hold ‘Em—if you get ’em, fold ’em. Two Aces is the best possible draw.

Step 6: The flop
After the first round of betting, the dealer “burns,” or discards, one card, then turns up three communal cards, called the “flop,” in the middle of the table.

Step 8: The turn
After the second round of betting, the dealer burns another card, then turns up a fourth communal card, called the “turn.”

Step 10: The river
Finally, the dealer burns another card, then turns up a fifth communal card, called the “river.”

Step 12: Single player left
If everyone but a single player has folded, that remaining player is the winner and doesn’t have to reveal his or her cards.

Step 13: Reveal cards
If two or more players remain, they reveal their cards in what is called the “showdown.” The winner is the player with the highest five-card poker hand made up of any combination of the five community cards and his or her two private cards. If two or more players have the same winning hand, the pot is divided evenly.

Tip
In a showdown, the last player to call the bet shows their cards last. If nobody has bet, it’s the person to the left of the dealer’s button.

Step 14: Begin next hand
When the hand has been played to completion, the dealer, small blind, and big blind buttons rotate clockwise one player to begin the next hand.

Did You Know?
Texas singer Kenny Rogers knows when to hold ’em and when to fold ’em—he’s had 5 wives in as many decades. 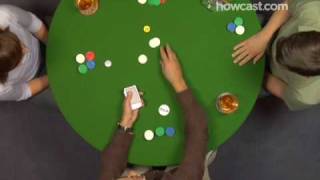 10 thoughts on “How to Play No-Limit Texas Hold ‘Em”