Hey, I’m Nicky Numbers, a Professional Poker Player, whose going to talk to you today, about the best starting hands in poker. Now, when most people are talking about poker, they mean No Limit Hold Em. The best starting hands in that game are, big cards, and big pairs. So, hands like Ace, King. Especially Ace, King, suited are incredibly valuable.

This is a true, premium hand. Another example would be pocket Queens. Any pocket pair of Tens, or higher, is going to be a premium one. Hands like Ace, Queen, are also incredibly valuable, because they flop top pair regularly. Ace, King, for example, flops top pair, 30 percent of the time. Big pocket pairs have tremendous value because often they’re an over pair to the board, and when they’re not an over pair to the board, sometimes they flop sets, which are really strong hands. A set is when you have a pocket pair, and then a third card that matches these two, comes on the board, so, you have three of a kind. Now, these are traditionally thought of as the categories of hands that are premium holdings. Pocket Tens are better, Ace, King, Ace, Queen. You only get dealt one of these hands, 4.7 percent of the time. That’s about once, every other round, if there’s ten people at your table. So, these are infrequent occurrences. If this is all you play, you’re going to end up playing way too tight. There are other hands that also play well in No Limit Hold Em, and have tremendous value. And the deeper stacked you get, meaning the more big blinds you have, the better these other hands will play.

Hands like pocket Deuces. A pocket pair is going to flop two pair, or better, about 12 percent of the time. It’s an incredibly powerful hand, and the most likely hand of any, to flop a monster, pocket pairs. Another valuable hand is suited connectors, cards that are directly connected to each other, and are of the same suit. So, they’re sequential, like, Six, Seven. Another example, would be a suited one gapper, like Seven, Five, or, a suited two gapper, like Seven, Four. Cards that have no gaps, and are directly connected, have one gap, or two gaps, and are suited, have tremendous play ability in No Limit Hold Em. For example, a true suited connector, like, Four, Five suited through Jack, Ten suited, is going to hit the flop to make a big hand, or a draw of Eight outs or more, about a quarter of the time. On the surface, it looks like you only have Seven high, but these cards work tremendously well together, and create a synergy that results in the hands having a lot of value in their ability to continue passed the flop. Another example, is a suited Ace, like Ace, Six, or Ace, Deuce. 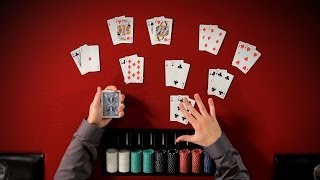